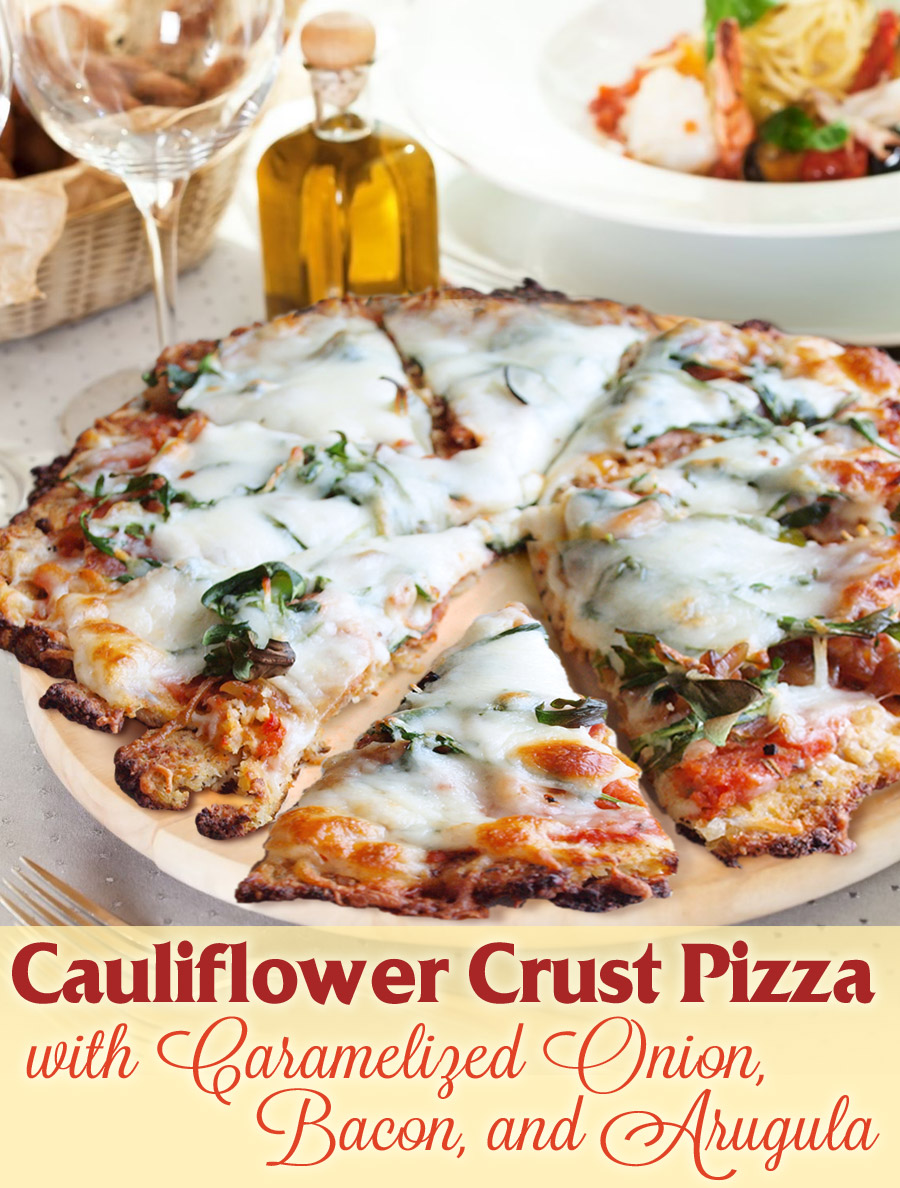 Everyone loves a slice of pizza, but if you have a gluten allergy or wheat intolerance, ordering take out can be difficult. So why not make your own at home?  Not only is this cauliflower crust delicious, it’s also completely gluten and grain free!  And with a zesty homemade sauce and gourmet toppings like caramelized onions, crispy bacon, arugula, and creamy mozzarella, you’ll be glad you skipped delivery and made your own!

Gluten free pizza crust is often too hard, too dry, and too bland, but this cauliflower version is a tasty and totally comparable alternative. It’s so scrumptious that you’ll probably forget you are eating a pizza crust made using cauliflower, and it won’t crumble or fall apart in your hands.

1 tsp salt (if the tomatoes have salt, don’t add any extra)

(This recipe will make a large amount of sauce, so you can halve the recipe or save the extra sauce for later)

For the cauliflower crust:

Start by making your sauce.  You can use pizza sauce from a can, but making your own is so simple.  Pour the diced or whole tomatoes into the food processor.  Make sure to drain them or the sauce will be too runny.

Add the clove of garlic, dried oregano, pepper, and salt.  Check the can of tomatoes to see if they already contain salt.  If so, you won’t need to add any extra.

Pour in your olive oil.  If you like a little heat, try a green or red chili oil to spice up the sauce.

Puree the ingredients until the sauce is smooth and there are no chunks.  Set aside for later.

Now it’s onto the caramelized onions.  Heat 2 tbsp of olive oil in a large skillet or pan.

Finely slice 2 medium-sized onions and add them to the pan, along with a pinch of salt.  Cook over low heat, stirring frequently, until they begin to brown.

Turn the heat up to medium and continue caramelizing the onions.  As a sticky glaze starts to develop on the bottom of the pan, pour in a few tablespoons of water and scrape the glaze from the bottom and incorporate it into the onions.

Keep repeating this step every few minutes for about 25-30 minutes, until the onions are dark brown and taste slightly sweet and bitter.  Remove them from the heat and set aside for later.

While the onions caramelize, cut the bacon strips into small pieces and cook in a non-stick pan over medium heat until crispy.  Drain the oil and set the bacon aside.

Now it’s time to tackle the dough.  First, place a pizza stone or baking sheet into the oven and preheat to 450 degrees.  Wash and dry your head of cauliflower.  Cut off as much of the stem as possible and use just the florets.

Pulse the florets in your food processor for about 30 seconds to a minute, until they become powdery and snow-like in texture.  You should end up with about 2-3 cups worth.

Place the cauliflower in a microwavable dish and cook, covered, for 4 minutes in the microwave.  Then dump the cooked cauliflower into a clean tea towel and let cool for a few minutes.

Once cooled, wrap the cauliflower in the tea towel and wring it well, squeezing out as much of the liquid as possible.  Too much liquid in the dough can make the crust too crumbly.

Dump the strained cauliflower into a bowl and add your Parmesan and mozzarella cheese, as well as your salt, garlic powder, and dried basil and oregano.  Crush the dried herbs up before adding to the other ingredients, either with a mortar and pestle or just with your fingers.

Stir the ingredients, and then add your egg.

Mix everything together.  It works best when you use your hands.

Place a large sheet of parchment paper on a cutting board and lightly grease with oil or a non-stick cooking spray.  On the parchment paper, form the dough into a crust.  Make sure it’s not too thick or too thin.

Using the cutting board, slide the parchment paper onto the pizza stone or baking sheet.  If you don’t have parchment paper you can form the crust on wax paper, but DO NOT place the wax paper into the oven.  In this case, you would grease a baking sheet and cook the crust directly on it.
Bake the crust for 8-12 minutes or until it begins to turn golden brown.

Remove the crust from the oven and top with your sauce, caramelized onions, bacon, and arugula.  Cover the toppings with shredded mozzarella cheese.

Place the pizza back in the oven for another 6-8 minutes and cook until the cheese is bubbly and melted and turning golden.  Let it rest for a few minutes, and then slice and serve! 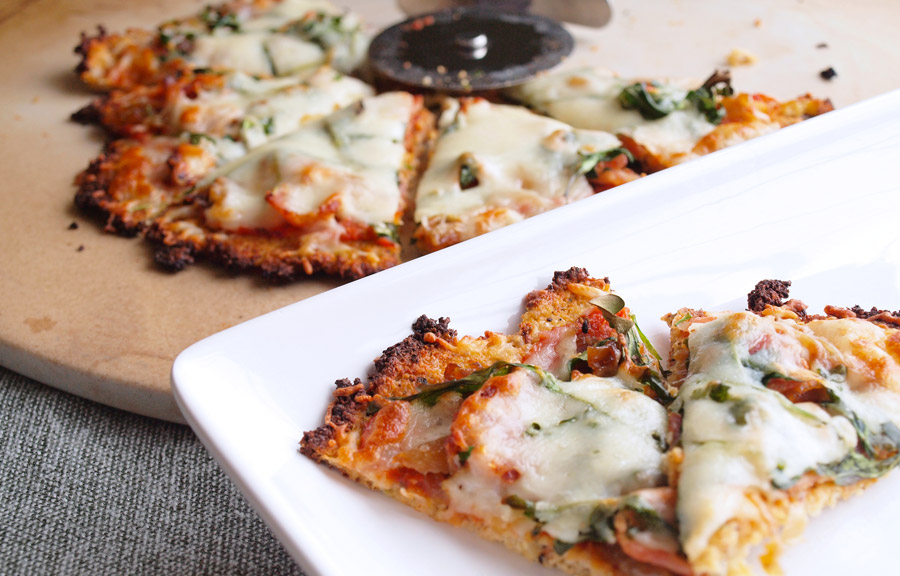 Chili Recipes For The Big Game 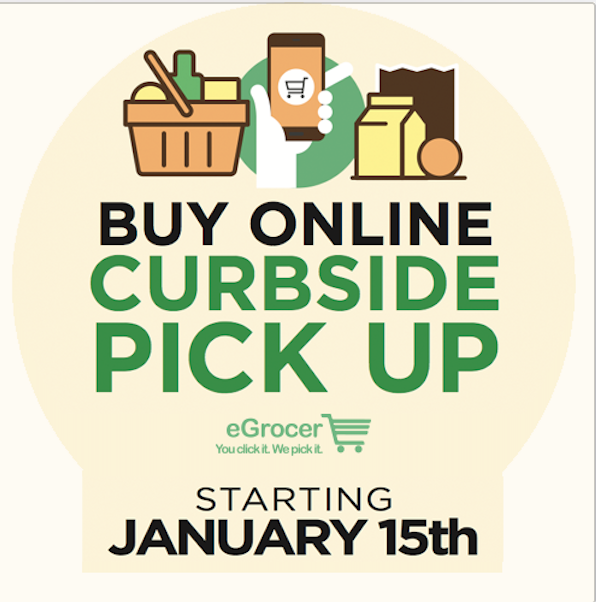 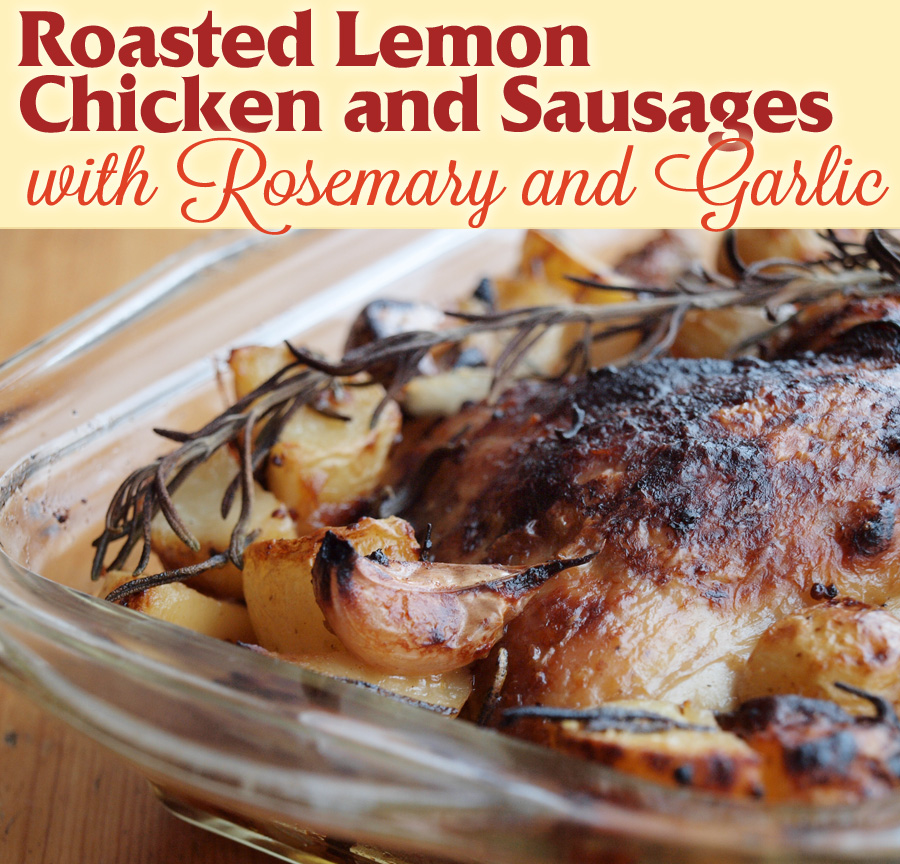